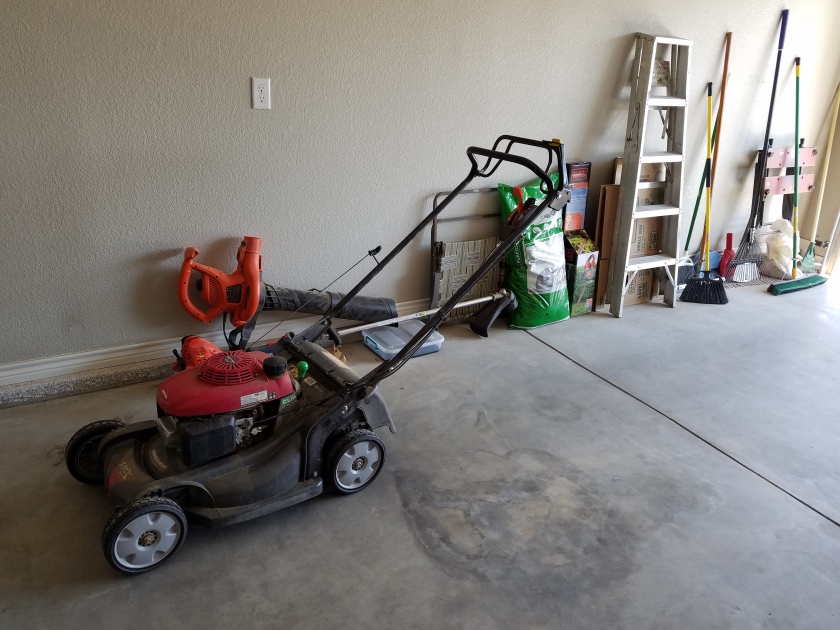 This past weekend Cookie and I sold our house!  We’ll be moving soon to a gated community in the city of Odessa, just a few short miles from Midland.  They take care of everything there, so I won’t be mowing anymore lawns after we move.  I’ll be a retired lawn warrior, and I’m both happy and sad about that.

I started mowing my parents lawn when I was eleven, inheriting the job from my two older brothers.  It was your basic lawnmower back in the day; no gadgets.  Back in those days, there were still a few people in our neighborhood using powerless mowers, cylindrical spinning blades operated by muscle!  But we had a gas mower, which was a very good thing since we lived on a corner lot, and had one of the bigger lawns in our neighborhood.

I liked mowing lawns right from the get go, and landscaping in general, something I learned from my dad.  He allowed me to mow other lawns with our mower, as long as I’d spring for the gas.  It was the ideal business model, considering the low cost of gas.  Soon I had a number of customers, and the money began to flow in.

It was then I discovered a curious thing about some of our neighbors, and how they cared for their lawns.  Some of them would keep their front yard neatly mowed, and completely ignore the back.  I didn’t make much mowing the front yards, because they were small, but the large yards were a teenage bonanza!

The unfortunate thing was, I had to mow the backyards twice and sometimes three times, in order to make it look right.  Even worse for both me (and the mower blade)  it was impossible to know what might be hidden under the very thick grass.  This was the Detroit area, and we always had plenty of rain.  I saw many a snake, and once I got bit by a spider, causing one of my legs to swell up.  And than there were the discarded toys, rocks, pieces of wood, and even pieces of metal.  I sometimes discovered ancient car parts buried in the grass, as one would expect mowing lawns in Detroit, the aptly named “Motor City”.

But the worst lawn I mowed, and by far the most lucrative, was a neighbor’s house just down the street.  The house had originally been owned by a cement contractor, whose son Ron Jr. was a best friend.  Ron Sr. had used dyed concrete and stone to build various decorations for his backyard.  Over the years he built a wishing well, a huge barbecue structure, bird feeders, lawn statues, patios, tables and chairs.  The problem was, when he finished doing these jobs, he’d bury the scraps in his yard.  Or, he’d just build piles on the grass, a haven for rodents and snakes.

When they moved, the new owners were a couple of ladies, owners of a Tennessee horse ranch.  Like my Dad, they were both teachers in the Detroit school system.  In the neighborhood, given those times, they were politely called “the teachers.”  They paid me good money to retrieve all of Ron Sr’s. debris, and haul it out to the curb.  Even so, chunks of concrete and stone were always rising up out of the ground like proverbial spirits, causing dents in the mower blade.  My dad and I had some spirited discussions about that; there were a few times I had to pony up money to pay for a sharpening, and in one instance, I had to buy my dad a new blade!

As I got older, I moved on to more lucrative things, but I’ve never stopped loving to mow. I love to landscape in general, though my older back is much quicker to protest.  And so, it’s with some sadness that I surrender my mower, and move on to this new phase of my life.

And then, of course, there is my dementia to be considered.  A lawn mower blade, as some have found out, can sometimes be unforgiving. They’re a lot safer now than when I was a lad, but that sharpened blade still has to spin.  Best to leave it alone before I make a mental mistake, and find myself missing a finger!

That is the one of the hardest parts of dementia.  Like most kids growing up in Detroit, I couldn’t wait for my driver’s license!  I’ve always loved driving, no matter the place, and it’ll be hard to give all that up.  However, I had to take my own father’s keys away, after a thrilling ten minute ride with him, during which he nearly had two serious accidents. And so, this lawn warrior will give up his car keys, and surrender them to my Dementia.