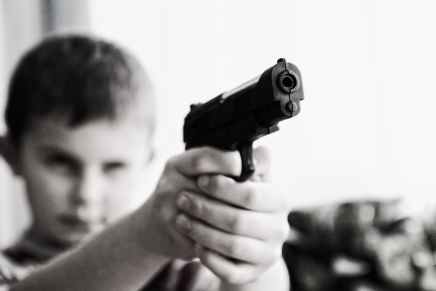 I have Dementia.  I truly believe I could walk into any gun shop and buy a weapon.  Think about that.  I suppose some of you might think, “how is that possible?  Do I really want a guy with dementia walking around with a gun?  A guy with memory lapses, who sometimes forgets where he leaves things?  Yet, that what its come to in this country.  Think about that, as we all await the next shooting to take place.  You know it won’t be long.

The medication I take for Dementia is powerful stuff.  Believe me when I say that.  But it’s nothing compared to the meds that other folks out there use on a regular basis.  And yet, they continue to be able to both buy, and own weapons.  We’ve made it a convenience in this country.  Like going to the Supermarket.  The right to bear arms sounds so wonderful, until the next bloodbath, and we go through the same cycle again.  My father was a teacher in the City of Detroit for many, many years and he never had to encounter a  weapon.  The times certainly have changed, and not for the better.

I spent twenty years as a police officer.  When I retired, I got rid of my guns.  I trusted, and I continue to trust the officers who work on our streets.  I know they’ve been back-grounded and they’ve had extensive training on both using and storing their weapons.  I just can’t say that about the guy down the street.  Look no further than the shootings in Florida.

You may call me demented, but I don’t much care anymore about the right to bear arms.  The blood of the dead children and teachers, have long since washed that away.  We’re  not living in a John Wayne movie, and hopefully, we’re way past playing Cowboys and Indians.  Our country is changing and not for the better.  As much as I’d like to just pray the problem away, I really believe the Lord wants to see me/us in action.  The clock is ticking; what are y’all willing to do?