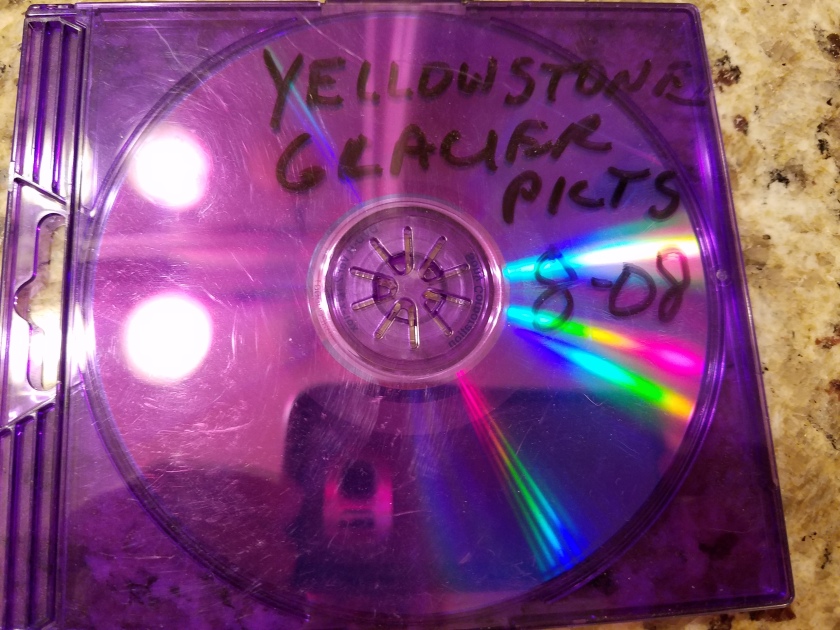 While in the midst of my packing, I happened to set the above CD case on my bathroom counter.  As I walked past it a bit later, I discovered the case was also a prism, both reflecting and refracting the light.  I decided to leave the case on the counter, so I could enjoy the beauty until we’re ready to move.

It also brought back memories of the death of my mother.  She’d been diagnosed with cancer back in 1975, after her dentist, of all things, had unexpectedly discovered a tumor.  The cancer had already moved into her lymphatic system, and subsequently, through various parts of her body.  She lasted six years, the last two years by far being the worst.  She spent some time in the hospital and then with hospice at home.  The pain was intense, and the medications were strong, and so I gave her some prisms I had purchased in college.  My father hung them up in her room in the hospital, and then later, in her bedroom at home. She loved to lie in her bed and to watch the many beautiful colors that danced on her walls.

The memories have made me think about this thing we call vision.  There’s a whole lot we can’t see in the world that surrounds us.  The light we can see, because it fills up the darkness.  But to be able to to see the lights’ amazing complexity, it must be refracted, much like in the biblical story of Noah.  Noah’s family saw the light refracted in the arc of the rainbow, after the flood in the great Bible story from Genesis.

In a sense, it’s pretty much the same way we get to know people.  Our first impressions can often be wrong.  We have to spend time getting to know folks, of seeing them them from a number of angles.  What we see on the surface is often not what we judge that they are.  To judge others without really getting to know them, is to miss the incredible complexity of life.

At times I wrestle with the pain of dementia, as I struggle to get on with my life.  At times it is frightening, I won’t deny that.  But there’s also great insight, and at times out of that darkness comes God’s comforting light.  Not necessarily the light that drives away darkness, but light refracted, revealing life’s more intricate depths.  It is a glimpse of the wisdom that lies dormant within us, awaiting that time in one’s life when we’re able to to hear it.

May you each be blessed as you travel on your own  journeys, and know that my prayers will be traveling along with you.